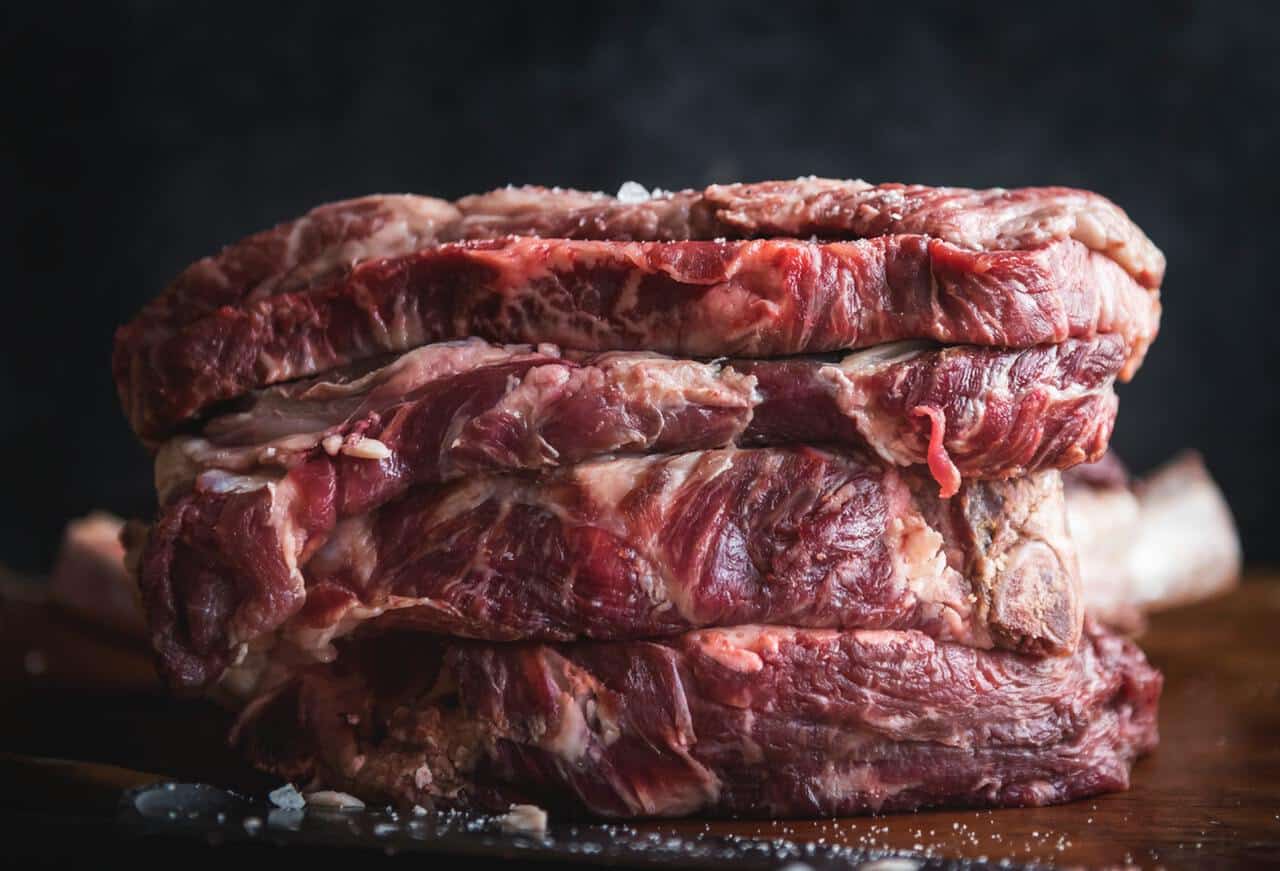 So this is an interesting thought… What if you could eat meat and no animal suffered or was killed and it was kind to the environment… would you? I think this will be a big debate amongst vegans in the future and not all of us will agree and as time passes we might even change our minds! For now I am a ‘ewwww no that’s gross! Frankenstein meat anyone!’ But I need to explore this further!

So what is lab grown meat and what do vegans think about it? As the name suggest it is meat grown in a laboratory. Scientists use stem cells and grow the meat from there, so they aren’t growing a full size animal, just a lump of flesh. And, shocker, no it isn’t vegan read on my friends read on.

What exactly is it?

It is meat grown from stem cells in a laboratory, scientists take stem cells from animal muscle and then basically let it multiply. So it looks and tastes just like meat it has the properties of meat and they can grow just the meat required, the best bits so no fatty, grisly leftovers!

Is it real meat?

It is, although initial trials were dry so it might need fat and blood added to stop it being too dry, it is meat and will taste and feel like animal flesh. However as there won’t be the any bone in the process there is a possibility it will lack some richness of flavour but I am sure there can be flavourings added and therein lies another concern will we need to add artificial ‘stuff’ to make the meat as palatable and tasty and what will that mean to health and the environment? Look at cigarettes… we realised they were making us sick … rather than face the discomfort of quitting someone came up with vapes… now we are looking at the effects of vaping ‘popcorn lung’ anyone? Its a classic fail, ‘fix’ a problem and cause another … where was the research? If we had faced the fact that inhaling anything into our lungs, apart from good old O2, was not a good thing and we tackled the addiction and dealt with the withdrawal we’d be done but now we need something to be manufactured to help us stop vaping! I know its hard to give up anything let alone something addictive but imagine there was a catastrophic world disaster and we were barely surviving and there were no cigarettes or vapes left… would you put all your energy into producing some quickly rather than feel the temporary pain of withdrawal? I am guessing that it wouldn’t be a top survival priority and you would, likely, survive without them! It sounds flippant I know but we are facing a massive world disaster and we don’t want to make this one change because its uncomfortable because some people would lose their wealth and Piers Morgan would have to eat a Greggs vegan sausage roll! Creating a ‘new’ meat source isn’t the answer it will likely cause other problems how about we grow plants for food? We grow them with all the knowledge we have, companion planting, plants that encourage bees and butterflies for pollination etc we can do that without cruelty, with much less environmental impact even having a good, positive impact… imagine!!

There is no reason to think it won’t be safe since it is the same structure and has the same properties as meat. I guess that maybe to make it cheaper some manufacturers might start adding stuff but in its pure form it should be as safe as meat. In actual fact because its not pumped with hormones or antibiotics and only the lean quality meat will be grown it could be safer and healthier … however keeping the environment where meat is grown and produced clean and free from bacteria might prove to be a massive problem once the process gets bigger, the temperatures used to culture will be also perfect for bacteria to grow so how will they stop this from happening will it, again, be with the use of added antibiotics? And to encourage growth might hormones or additives still be used? There are still so many unknowns and we may just be setting ourselves up for more problems to be solved, problems which would be addressed by a mass plant based diet!

Is it better for the environment?

Since we will need less animals and animal agriculture is so damaging to our environment this will definitely be better. It is reported that animal agriculture could be responsible for as much as 15% of greenhouse gas emissions and growing meat could reduce this by 96%. Animal agriculture has a huge environmental impact as we need to cut down forests to graze animals and to grow their feed this would effectively stop and who knows perhaps we could replant and re-establish lost forests and eco systems. I would be interested in knowing the output from factories growing meat … what will the emissions be and the waste … however I suspect that the waste pouring into our waterways from animal agriculture will be much reduced which would be awesome! We are a long way from knowing the environmental impact since at the moment start ups are only able to produce small amounts of meat and are far from refining their production methods so it unclear what chemicals will be used and the amount of waste produced amongst other things.

What about animal bi-products?

Animal bi-products are used in so many consumables, Peta have a comprehensive list here!I wonder how manufacturers will manage to make their products without animal bi-products beers, wine, cosmetics, medicines, pet food, cleaning products even bread, will we keep animals just for their bi-products and will we need so many that we might as well be farming them for food? Or will we find synthetic alternatives? and if so what will be the environmental and health impact of those? We have set ourselves up without thought for our world or animal lives and unpicking those mistakes will be costly and take time, we seem to always er on the side of cheapness and convenience so we could end up right back here with huge issues because we couldn’t just accept we need less, we need to be kind and we need to think past our own comfort or wealth!

No it isn’t and here’s why … Lab grown meat requires stem cells which are harvested from animals so we are still using animals as a product also the cells need to grow in a solution which is most like them in properties so fetal serum is used, yep serum collected from fetus’! It has been reported that to collect this serum a pregnant cow is slaughtered and at the same time a 3 month old fetus is extracted and a needle is inserted into its still beating heart and it is bled to death … the procedure takes around 35 minutes and it is important the fetus is alive! If this is true this is a barbaric practice and could never be condoned by vegans! However there is a start up company called ‘Meatable’ who are finding ways to use stem cells and a growing medium that isn’t from live animals but from the umbilical chord! Its interesting and shows that research is being done to truly make lab meat cruelty free, however animals are still a ‘product’ used by humans for our own ends. There will still need to be animals who are controlled by humans to produce this meat there seems to be no way around that since we need their cells! We would need umbilical chords so a cow would have to get pregnant and give birth and what will happen to the babies born? There are so many reasons why this isn’t cruelty free…

So should vegans support this method?

The meat produced isn’t vegan so I wouldn’t consume it, however … humans can be stubborn and the vast majority of meat eaters, no matter the environmental impact or the cruelty suffered by animals would stop them consuming meat and lab grown meat will lessen the impact on the environment and the mass cruelty so that is still a good thing! I would prefer that humans started to look at their actions and address them to correct the unnecessary cruelty and damage done but it seems to me we have a inherent desire to have what we want when we want it no matter the cost. Ultimately this is what needs addressing our self indulgent nature and never ending consumerism. If we could get comfortable with being uncomfortable and not having our every desire met almost instantly. If we could see a bigger picture and make the evolution of our soul and character more important than our desire to consume meat and animal products, fill our wardrobes with more clothes than we will ever need ultimately we are feeding our addictions at the expense of animals and the environment because if we don’t and we have to be uncomfortable we might have to address our own pain and short comings … but we would improve our soul and our world…  This to me is what is so fundamentally flawed about us humans, we want what we want end of…and we are arrogant enough to think we can control nature and defy physics … our world needs the Rainforests to breathe, we need Bees to pollinate but we have ignored this knowledge in favour of ourselves and our comfort and desires until its nearly too late! And now we try to find ways out of this which won’t cause us too much discomfort! Lets grow our own meat and yes less animals will be harmed but still some since we need to harvest stem cells from live animals and source bovine fetal serum from calve fetus … and we need them to be alive while we harvest! Maybe we will come up with even less cruel ways to grow our meat but getting there will cause pain and is cruel. We are in danger of simply causing other problems whilst trying to ‘solve’ this one and its a bizarre way of thinking  … imagine we put all that effort into re-educating ourselves on quality, nutritious plant food diets, imagine we put the environment and animal welfare to the top of the list rather than our desire to consume!  All the research needed the trials and the experiments could just be avoided its exhausting and demoralising it is time to wake up and start living!    ‘In a world where you can be anything be kind’.