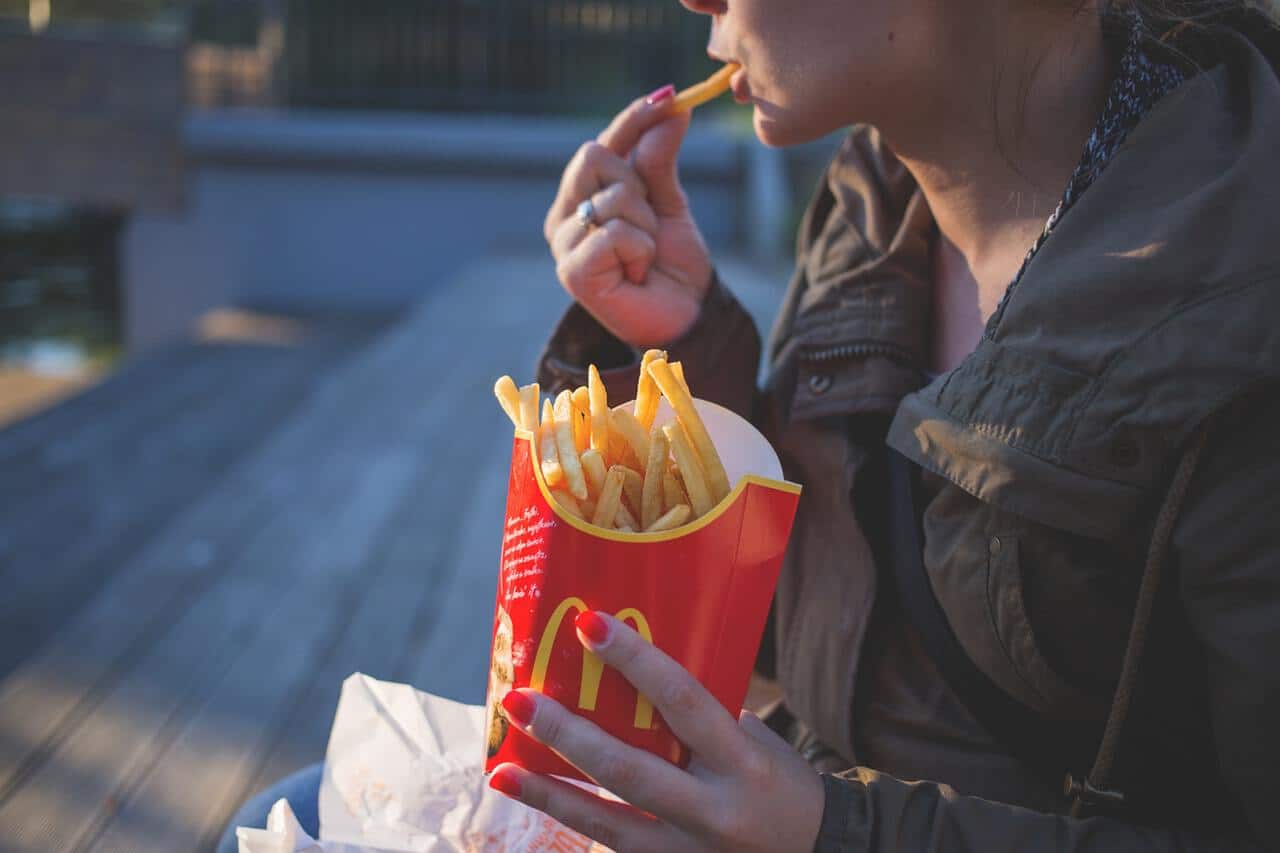 Obviously, Mcdonalds and the like sell meat products and use copious amounts of animal products! They offer a limited range for vegans and vegetarians, so …

Should vegans support chains like Mcdonalds?  This will always cause debate amongst vegans, in one camp is the feeling that supporting them encourages the use of meat and dairy in their products you are essentially paying for them to continue the practice even if you only purchase vegan products. In the other camp is the feeling that we should encourage and support companies who offer vegan fare!

So you choose your vegan goods carefully … how carefully? Do you check that the brand you are buying isn’t owned by one of the ten major brands? Check out this article, it shows that ten major brands own almost all of the food and beverage brands out there!

So you buy your vegan fayre then discover that it is owned ultimately by brands that are not particularly ethical or vegan. Daiya, for example, is owned by Otsuka a Japanese pharmaceutical company which tests on animals. It was a fairly recent acquisition with  Daiya claiming that by partnering with a huge company they could reach more people with their plant-based products! It caused some outrage amongst the vegan community many claiming that the owners were only ‘in it for the money’.

Quorn products aren’t all vegan should we avoid vegan Quorn products? Even Linda Mccartney products are not all vegan! The Linda Mccartney brand was owned by Heinz and is now owned by Hain Celestial Group which also own Free Bird which is an organic free-range chicken supplier! Then there is the issue that these brands are sold in shops which also sell animal products!

How deep do you go?

When selecting vegan fayre how far do you go with checking it’s veganness? Do you simply check the ingredients and move on? For instance, buy only the Pringles flavours that don’t contain any animal products or avoid altogether as they have flavours which aren’t vegan? Do you only buy vegan brands… do you check that those brands are not affiliated to any other non-vegan brand? Do you go so far as to make sure the owners, directors, and investors are vegan? Do you check they only employ vegan workers? It is a minefield and difficult to find pure vegan products that are vegan all the way! I mean if my neighbour gives me apples from their back garden do I take them knowing they are meat eaters?  A step too far perhaps but who decides what is a step too far and what is acceptable! Probably a decision we have to make as individuals!

If we as vegans support Mcdonalds, along with other big chains, are we being vegan enough? Obviously, Mcdonald’s cause the slaughter and suffering of thousands of animals… well consumer demand causes it … so if we buy their vegan range are we supporting this? My thinking is that I want plant-based, cruelty-free food to be easily available so it is easy for people to try and make that choice! We have children who enjoy fast food and want to join in with their friends and because of the new ‘range’, they can enjoy time with their friends. I want my children to be able to make the choice to eat plant-based and be able to be ‘normal’! Of course, as we get older and more secure in who we are and what we believe we care less but that’s a process and I want my family to stay on the plant-based path!

How far would you take it?

It is hard enough being vegan in a non-vegan world! If we take the stance of not supporting chains like Mcdonalds then should we not shop in supermarkets, after all, they supply lots of non-vegan and unethical foods, from non-vegan unethical companies. What about the farmer down the road where I get potatoes but he also sells eggs.

So here’s my opinion… for what it is worth! I fully support chains trying to include us, vegans. Remember when Greggs brought out their vegan sausage roll? OMG poor Piers Morgan it was as if his world was ending and then he tried one live on the telly!! Of course, he spat it out, he wouldn’t admit that it was good now, would he! The coverage and the discussion that rose from Greggs doing vegan was awesome, it raised the vegan argument, gave vegans a voice and even Piers couldn’t spoil it for us!

I LOVE that veganism is becoming mainstream, I love that the animal and environmental issues are being raised! I don’t even care if people become vegan for enviro issues or animal rights its win-win on both counts!  Macdonalds is a huge user of animal products and has a big impact on the environment and anything they start to do to change that an lessen the impact is all good! We vote with our choices… I only buy vegan so if you want my money supply me with vegan food! And when they do I am going to support them and I am going to push for veganism to become mainstream and easily accessible!

I will support brands who bring out vegan foods in the supermarkets so it’s easy for me to shop and cook and easy for others to try!  I have friends who are sure they will NEVER be vegan BUT they see these things in the shops and give them a try… the raising of awareness has got them thinking and now they have a couple of vegan meals a week! The less demand there is for meat and animal products the less that will be produced and the more demand there is for vegan foods the more companies will produce because they only care about their bottom line!

We, vegans, have a big voice and it is getting bigger all the time so, for me, I am hoping this doesn’t slow down but the choices get bigger and even meat eaters choose them! I am hoping that Mcdonalds offers a vast range which crowds out the meat range and they won’t do that if the demand isn’t there!