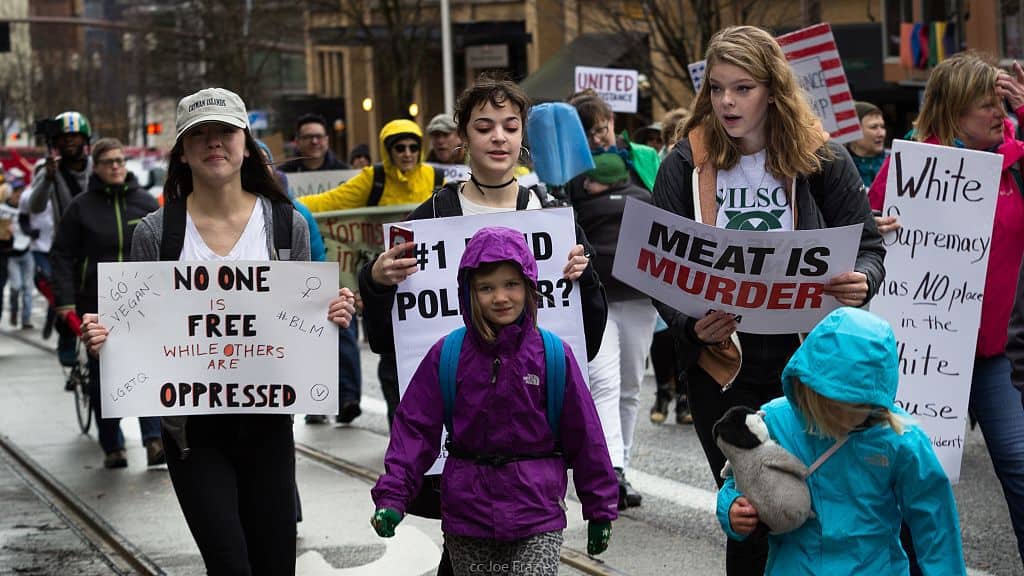 Vegan activism takes many forms, we have awesome YouTubers who spread the message across borders and some who also visit universities and colleges to give talks and educate. Still, others stand outside MacDonalds with gruesome, all be it truthful, video footage and leaflets about animal cruelty, others who ‘bear witness’ at slaughterhouse gates and still others who rampage establishments and rescue animals.

So does vegan activism work? To answer that question we would need to look at all activism in more detail, but for sure, there is an increase in veganism and awareness of the impact using animals has on the animals, our planet and us, so something is making people sit up and take notice.’

With the likes of Joey Carbstrong and Earthing Ed having youtube channels showing them debating with people or bearing witness at a slaughterhouse, we see vegan activism at its best, in my opinion. They try to remain calm but passionate, they know their stuff and can give a strong answer to any meat lover’s questions, comments or arguments and for the most part, they stay calm and respectful.

Joey has taken to setting up a table with a sign saying ‘milk is murder change my mind’. It is a great way to open up conversations and even as he was being thrown out of a dairy show he was raising the issue of the cruelty connected to dairy with the security guards! I believe seeds are sown when this type of activism is employed and I can see that it will make a difference in the long run.

Gary Yourofsky is very direct and uncompromising in his approach and he feels that ‘pussyfooting’ round won’t achieve anything! He believes that if someone is ready to listen then they will if not nothing you say or do will change their mind. He talks about how his family isn’t on board but he asks them to eat vegan if they are meeting up for a meal, they wouldn’t so he left the restaurant! He has been and still is a massive influence in the world of veganism, without a doubt some people respond well to his direct no-nonsense approach, but unlike him, I wouldn’t rule out a softer approach, we are all different and were I to be like him I would come across as fake. Also, I wouldn’t respond well to his approach and there will be others like me!

Thankfully we don’t see many violent protests which is the way it should be since veganism is about love and peaceful living. We are against the violence the meat and dairy industry levels on animals and fighting violence with violence would be counterproductive.

I don’t consider myself an activist, I enjoy having a conversation about veganism but I feel I am a bit weak with my arguments! However, my married daughter and her husband have some regular meat-free days, just from our chats! The same has happened with some friends of ours who now also have regular meat-free days. It’s small steps but who knows where it leads so maybe I am sowing seeds!

Another way to promote veganism in a less ‘activist’ way is to support restaurants who have vegan menus. I regularly eat out with meat-eating friends and we choose somewhere that also serves vegan food, this usually sparks a discussion but I wouldn’t dream of calling them out on their choices!

We try to support shops selling vegan goods, kind of like voting with our dollar! We also try to give awesome vegan gifts like a vegan sweet hamper for our son and his wife’s first wedding anniversary!

You won’t, at the moment, find me standing outside the butchers with a placard, or at a slaughterhouse but that doesn’t mean I think those methods of activism are wrong! On the contrary, I think these peaceful protests can be educating and definitely raise awareness.

Many of the YouTubers go out and lecture at universities and colleges and they give informative and engaging, passionate lectures and answer questions. I would think this is effective, those people are there because they choose to be and even if they want to challenge a vegan and hope to win somehow, these guys and girls are amazing with their answers and really know their stuff! It must be thought-provoking!

So I applaud vegan activists and I do think their presence and publicity will be having an impact! People are not able to blindly carry on using animals as the topic is raised and out in the open so they must make a conscious decision to support the cruelty.

I know people make excuses to carry on but the reality is with all the information which is put out there and all the awareness that is brought out they know the truth and are choosing violence BUT some are choosing at least better, meat-free Mondays, Veganuary, etc.

The vegan movement has reached the cosmetics and personal hygiene market as well with the Vegan mark splashed over it like a badge of honour!

It’s amazing to see the amount of new vegan food products out there, Greggs sausage rolls and they plan to veganise more of their range! KFC bringing out the imposter! Most supermarkets have a big vegan range now, veganism is becoming big business!

This is because of vegan activists pulling the veil off the meat and dairy and egg industry. Highlighting the torture and cruelty. Exposing the fakeness of free-range eggs and pasture-fed meat depicting happy animals on the packaging.

Joey Carbstrong did a youtube video with a ‘humane’ slaughterhouse! The owners allowed him to go in and film and ask questions. Their ethos was to have the animals killed in as fear-free, low-stress environment as possible. They only take from farms where the animals are treated well, although still killed before their natural life span and still not able to live freely displaying behaviours which are natural to them! They would have the animals arrive the day before and bed them down in comfy stalls the set up meant they weren’t herded to slaughter down narrow lanes watching the ones before die! It sounds idyllic right up to the point they kill them!

There is a place and a need for vegan activism and for the most part, it is effective I believe. A well thought out campaign or demonstration or a well-delivered lecture or youtube video shows that vegans are strong and passionate that they have something to say, something important, something worth hearing and people are responding and things are changing! You can’t argue with that!